We have found a great priced deal from Dublin to Zadar, Croatia on the Dalmatian Coast. Zadar, known for its stunning sunsets that even wowed Alfred Hitchcock. The Monument to the Sun is not to be missed as you can see from the photo above! The old town boasts Venetian and Roman styles but there is also modern parts to Zadar with a massive solar panelled public dancefloor! There is also Plitvice National Park which is a UNESCO World Heritage Site. Some of Croatia’s best beaches are a short ferry ride from Zadar, with Saharun described as the Telegraphs best beach in Croatia!

The flights are from Dublin leaving on Monday the 30th April and returning on the 4th May, click on the screenshot below to be brought to the Ryanair website.

The accommodation is Apartment Cherry which not only boasts the best location in Zadar but is also the best value for money property for Zadar on Booking.com! It receives an exceptional 9.7 out of 10. Click on the screenshot below to see photos, reviews and to book this bargain of a property! 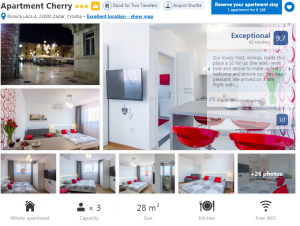 Buy Me a Pint